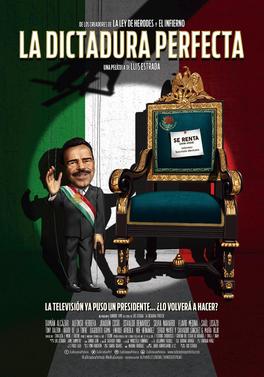 The Perfect Dictatorship one of the few far-from-perfect movies that everyone should see. Director Luis Estrada’s fourth film is a political satire that hardly diverges from his previous work. Funny? It tries every once in awhile, but fails at every attempt. Long? You betcha. This 140 minute movie probably could’ve worked just as well, if not better, with about 60 minutes cut out. Impactful? Oh, like a meteorite.

That’s because Estrada’s film works on a basic level. It knows exactly what it’s trying to accomplish and accomplishes it majestically, but then proceeds to throw a bunch of pointless details in the way. Case in point, the film’s final shot is beautiful and dark, a grim visual metaphor that summarizes The Perfect Dictatorship’s entire runtime. A perfect way to end a film…until an utterly unneeded epilogue concludes with more of a whiz than a bang.

The Perfect Dictatorship follows Carlos Rojo, a young producer at the fictional station TV MX, and his reporter/partner, Ricardo Diaz. After an incriminating video of a governor named Carmelo Vargas is aired on their station, the two are hired by Vargas to save his reputation (and possibly even improve it). Vargas is depicted as a vile, corrupt pig, killing on a whim and indulging himself in every imaginable earthly desire (even if he has to work with the criminal underworld to get it). Surprisingly, he’s the only one-dimensional caricature in a genre of film (political satire) that often relies on one-dimensional caricatures. Carlos and Ricardo are never depicted in a positive light, or even in a morally conflicted one, but their collectedness and know-how make them likable protagonist-villains.

Damian Alcanzar as Vargas is perfectly cast, balancing charismatic and disgusting in a role that, in other hands, would’ve been uninteresting. The rest of the cast, including Alfonso Herrera as Carlos and Osvaldo Benavides as Ricardo, aren’t quite as strong. That’s partially because of some weak writing and some out-of-place character-specific scenes, but mostly a result of the characters possessing a relatively slim emotional range.

The main plot is gripping in the best possible way, sprinkling in new developments as much as needed to keep a potentially dull concept engaging. But along with that sprinkling come a number of subplots that seem like filler at best and attempts at unnecessary complexity at worst. Only one, a story about what appears to be the only honest character in the entire movie, amounts to anything. And even it gets dropped about mid-way through the film, leaving other pointless scenes (such as those that cover an uninteresting group of criminals) to drag out an hour or so of additional runtime.

The camerawork, though usually standard, occasionally shows traces of genius. Scenes in tight spaces retain a claustrophobic feel without ever feeling crowded, and important shots are highlighted with a beautiful sense of shadow, reminding the viewers about the film’s dark message in contrast to its usually light tone.

Now, I don’t pretend to know Mexican politics. I especially don’t pretend to know the intricacies of Mexican media. But if this film is any sort of representation of the way Mexicans view the powers of their oftentimes chaotic country (and I think it does, considering what I’ve read online), then it’s something that we as US citizens should be aware of. With all the talk in the Middle East and Far East, we usually give little thought to our neighbors to the south. It’s time that we realize how many problems our next door neighbor still has. The Perfect Dictatorship is perfect for accomplishing just that, even if it achieves little else.