The majority of the previous console generation focused on developing the concept of the “cinematic game,” attempting to communicate to the player a feeling of being in a movie. As console power has increased and game development theory has advanced the industry has moved more and more towards open worlds; even series that were once linear, like Metal Gear and The Witcher, have made the leap from movie-like storytelling to sprawling epic. It’s a shame, then, that Uncharted 4 has to exist, as it represents the pinnacle of the cinematic species. It’s not only a bittersweet farewell to one of the most beloved characters in gaming, but also to a dying breed of interactive storytelling.

With Uncharted 4 developer Naughty Dog has solidified its position as one of the most talented studios working today. Uncharted 4 is a meticulously crafted game, not only in the spectacular graphics (arguably the best on any console) but in the ingenious design that remains controlled and linear without ever seeming so. Playing Uncharted 4 often feels like an open world, as the environments use subconscious visual cues more subtle and ingenious than even Half-Life 2 to pull the player along invisible strings. Never before has a puppet-player been able to feel so free.

But while the player revels in false freedom, Nathan Drake himself, long-time protagonist of the Uncharted series, is feeling tied down. At the beginning of Uncharted 4 the wisecracking hero has managed to settle into some semblance of a normal life with his wife Elena. His most grand adventures consist of diving for sunken cargo crates and stamping papers late into the night. The years show on Nate’s face, and his nostalgia for his old escapades is masterfully woven in with the player’s own nostalgia for the series that started almost ten years ago (especially in one section where Nate reenacts his classic firefights with a dart gun and some targets). Though the initial hours are heavy on non-interactive cutscenes, Uncharted 4 mitigates boredom by both sprinkling in action-filled flashbacks as well as using crowded environmental storytelling to minimize any necessary exposition.

Nathan’s life is suddenly interrupted when Sam, Nate’s yet-unmentioned brother, seems to come back from the dead, and lures Nate back into another pulp-fiction adventure in hunt for the legendary treasure of pirate Captain Avery.

But Uncharted 4 makes it clear that, as much as Nathan craves his previous life, he’s truly a changed man without the appetite for the excitement. Without spoiling anything, Nathan’s motivations are a far cry from the glory and riches that drove him in previous titles.

The same can be said for the rest of the characters, who are flawlessly written and acted beyond the high bar of previous Uncharted games. They’re not only older and more quiet; they’re more human, and it’s clear that the lessons about creating companionship and meaningful relationships in games that Naughty Dog learned from The Last of Us is shining through. As exquisite as the action is, Uncharted 4’s real draw is its thorough exploration of its characters that plucks more heartstrings over the course of the 15 hour story than almost any other action game has been able to touch.

In fact the entirety of Uncharted 4 seems deliberately designed to match Nate’s struggle with the disillusionment of adventure. Combat encounters are far less frequent, and most can be approached by a simple yet effective stealth system instead of guns blazing. Though the snappy variety of firearms makes the loud approach more fun, the quiet route does a better job of reducing the ludonarrative dissonance that has plagued Uncharted for so long.

This creates some problems with level design in combat sections; sometimes in an attempt to work for both stealth and shooting enemy encounters get caught in an awkward middle ground between the two. But in general, the game has shifted focus away from moment-to-moment combat to focus on climbing, set-pieces, and emptier chapters that allows the game to show off its unbelievably detailed world and develop its characters through passive dialogue.

Everything that Uncharted 4 attempts is the best the series has ever accomplished. Naughty Dog has finally figured out how to create a decent melee system that perfectly captures the fisticuff-tussles of Indiana Jones, and has also successfully created legitimate boss fights-highly scripted hand-to-hand fight sequences that are far more flowing and satisfying than the bullet-sponges that Uncharted has used in the past. Though Uncharted 4 doesn’t have a “flagship” set piece like Uncharted 2’s train or Uncharted 3’s airplane, it still imparts its share of ludicrously over-the-top action. Nevertheless it’s a shame that the car chase sequence, likely the game’s best action scene, was given away at E3.

There’s infinitely more delve into here, from the addition of a jaw-snapping air punch to combat and to a rope that encourages a feeling of smooth freedom throughout both climbing and fighting, but suffice it to say, Naughty Dog has made a masterpiece. Uncharted 4 ends with a tidy sense of closure, and though the Uncharted series could make a return, Nathan Drake and his band of thieves definitely won’t. Nevertheless, it may be better for Uncharted to die here and stay dead, not only to avoid the overdone prequel/sequel trap that Gears of War and Mass Effect are dangerously close to falling into, but also to see what else Naughty Dog is capable of accomplishing. They’ve checked the box on the cinematic game; it’s time they move into uncharted territory. 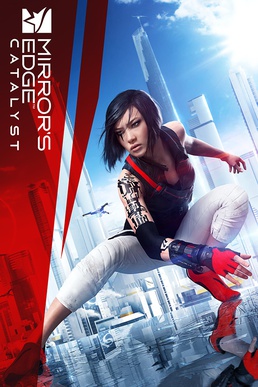 Mirror’s Edge Catalyst should have been a simpler game. It should have focused on what it does even better than its excellent predecessor. It should have cut down on the find-and-gather side missions that seem obligatory in open worlds. It should have gone with an entirely different story that does a better job of complementing its fascinating sci-fi future.

But it did not. Catalyst is so wrapped up in being bigger and better than the original Mirror’s Edge that it ends up only being bigger. That’s not inherently a bad thing; the first Mirror’s Edge was far too short to fully enjoy its refreshing, flowing parkour system. But Catalyst, at times, worries more about if you have something to do than whether or not what you’re doing works in its own context.

But I digress: Mirror’s Edge Catalyst takes place in the City of Glass, the capital of a futuristic nation overrun by a dystopian version of extreme capitalism. There is no government, only ruling corporations and the families that lead them. You play as Faith, a “runner” that acts as part of an illicit organized courier system across the rooftops of Glass. Catalyst thankfully wastes no time throwing you right into her bright-red running shoes and whisking you off to leap and climb across the tops of soaring skyscrapers.

In these simple moments of running from place to place, Catalyst is a magical experience. The Mirror’s Edge series remains the only legitimate example of good first-person platforming, and as you fall into the rhythm of jumps, slides, and wall-runs, Catalyst feels like playing water. It’s smooth, it’s crisp and easy and clear, and it is immensely satisfying. In a generation where design trends have moved further and further towards complicated three-dimensional movement, Catalyst carries on the original Mirror’s Edge’s mastery.

The core mechanics are strong enough to make Catalyst worth playing from beginning to end and then some, but Catalyst sets such a strong base that it becomes unable to proceed from its foundation. A few essential mechanics are locked within Catalyst’s simplistic and unexciting skill trees, but they become available within an hour or so. A rope that allows you to swing and grapple becomes available near the halfway point, but it can only be used at certain pre-designated points that are painfully rare throughout the world.

But just as Catalyst succeeds where the original succeeds, it also fails where the original fails. Thankfully there are no more awkward shooting mechanics, but instead,they’ve been replaced by a clunky martial arts system that feels at odds with the game’s emphasis on movement. Fights often fall into a pattern of kick, different kick, dodge, repeat until everyone is down, and ideas like knocking enemies into each other or off of ledges seem both silly and against Faith’s character (“I’m not an assassin!” she says at one point, but then proceeds to push dozens of policemen over railings to their doom). Catalyst tries to encourage you to use movement and the environment to your advantage, but this too quickly becomes cyclical. Enemies stupidly chase after you in your direct trail, which allows for a pattern of running in circles and leaping off of the same obstacles to score a downward kick before starting again to run away.

In fact every time Catalyst throws you into its parkour flow, it puts up a dam to block your way. Maybe it throws an enemy directly in your path that you have to fight or awkwardly push away to continue. Maybe it tempts you with one of the many collectibles that require you to come to a full stop to gather.

Not all diversions are so antithetical to Catalyst’s premise. Deliveries offer thrilling timed runs for modest EXP gain. GridNodes (which must be completed to unlock fast travel) offer interesting climbing challenges that require a large amount of vertical thinking. The rare side missions that the game offers usually succeed at introducing and testing some of Catalyst’s more obscure mechanics (like enemy alert levels and how to reduce them).

Missions themselves are usually a solid length and end before becoming tiring. They bring you on a tour of Catalyst’s gorgeous city, from underground tunnels to soaring sky-needles. Although low-quality textures can often make for a blocky horizon and rough detail, Catalyst’s minimalistic, vibrant color pallet and clean, modern architecture make it a visual joy. It’s a shame that the journey through such locales has next to nothing but a techno-babble story to tie it together. The campaign is barely coherent until almost three-quarters of the way through, and the game expects you to already know information and motivations that it won’t actually tell you until later on. The whole ordeal, the plot, the characters, the action, all feels written and acted by a group of rebellious teenagers. Only one personality, a hacker named “Plastic” ever succeeds at being entertaining. The rest of the cast, Faith included, either trudges along with no clear motivations or is dropped from the story entirely after just a few short hours.

All of this is baggage on what is at its core an improvement over its predecessor. Despite its apparent misunderstanding of itself, Mirror’s Edge Catalyst’s core gameplay mechanics still pull through to make it a wildly fun, if deeply flawed, experience.