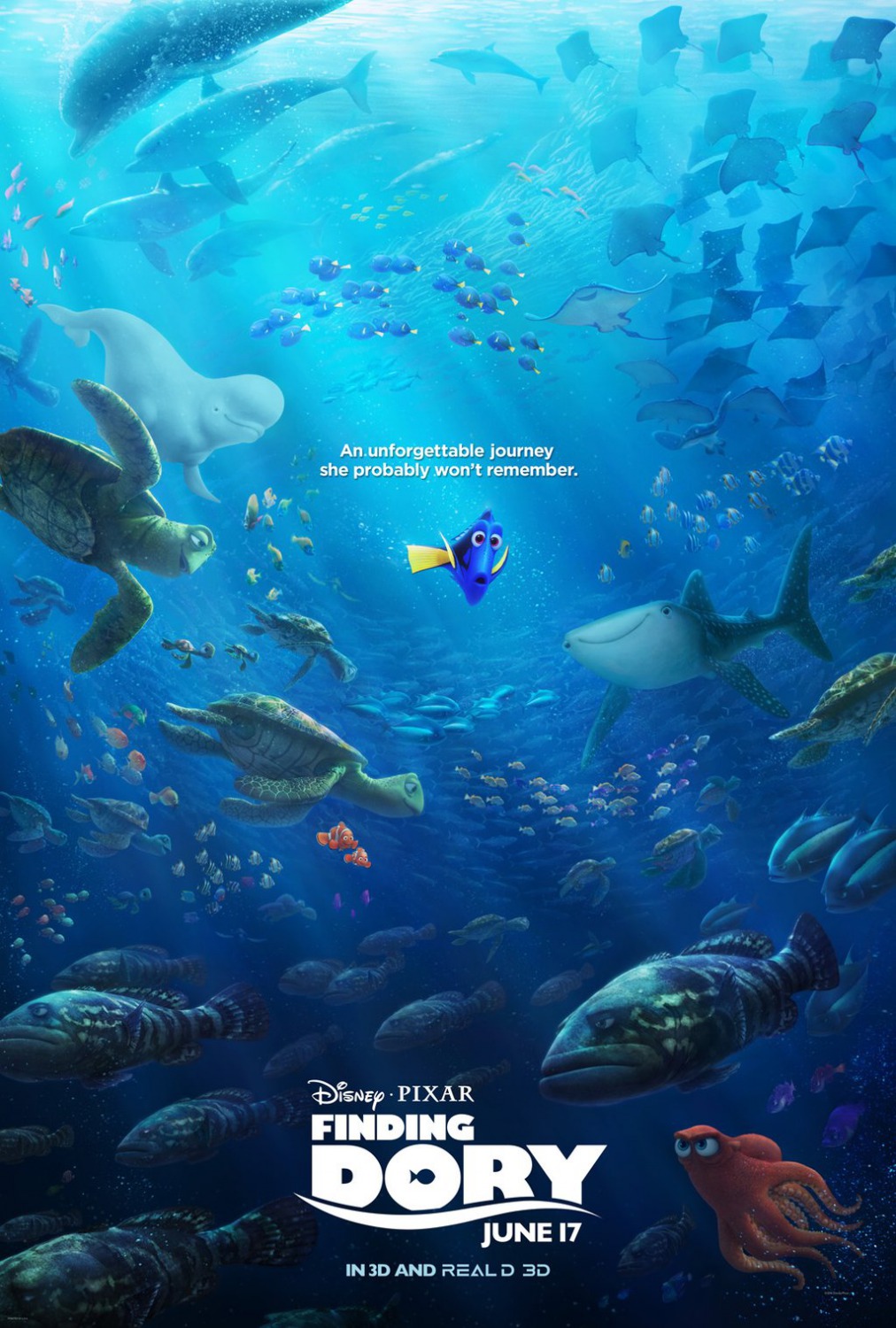 Finding Dory is a film as unable to focus and as instantly forgetful as its protagonist. Though its creativity abounds, its average visuals and impossibly nonsensical script throw it beneath even Cars 2’s wheels.

In most ways, the script of Finding Dory never should’ve sold. Director/co-writer Andrew Stanton (who also wrote and directed the original Finding Nemo) can’t focus on a single idea or plot thread for more than a minute or two. Though the overall concept of Dory’s search for her long-forgotten parents easily compliments her character in theory, in practice Finding Dory runs like a series of wildly disconnected vignettes, each strung to the other by ludicrously random plot devices that seem to exist not out of story necessity, but to stretch what should have been a half-hour short to a full-length movie. Marlin, Dory, and Nemo need to cross from the coast of Australia to California? Don’t worry, the surfer-dude turtle from the first film can transport them to the exact location they need to be in just a few seconds. Dory about to reach her destination and find her parents? No, instead let’s throw in a distracting sign to lead her in completely the wrong direction.

Dory and the supporting cast of aquatic characters are as engaging as in most Pixar films (with the exception of Dory’s parents, who seem saccharine and idealized to the extent that they unintentionally channel the creepiness of the button-eyed figures of Coraline), but the world they inhabit is bland. It’s colorful, for sure, but while one of Pixar’s primary strengths is their ability to transport viewers to other worlds (the first Finding Nemo did this better than any other Pixar film, capturing the beauty and danger of the ocean in a way that a human could never experience), Finding Dory elects to take us to…an unremarkable aquarium.

And maybe an aquarium is a better use of a child’s time than Finding Dory. While an aquarium can teach them the beauty of the ocean, Finding Dory can teach that severe mental disabilities can simply improve nearly to the point of vanishing if you will them away hard enough. While an aquarium can simultaneously enchant the adults, Pixar’s signature older-audience appeal is relegated here to a single sex joke (yes, you read correctly, a sex joke). Or better yet, return to the original Finding Nemo, whose perfect composition and cinematography, mature yet approachable story, and consistent balance between poignancy and humor make it a joy to watch a hundred times over. As for its sequel, Finding Dory has lost its way.

At one point in Moana, the boisterous braggadocious Maui (Dwayne Johnson) points out the largest of the films many plot holes.

It was something I had been willing to overlook; Disney’s reputation is such that I’m instantly willing to suspend disbelief. But once Maui brought it up, I naturally expected Moana to address it. The film never does. In pointing out its own enormous logical leaps, even within the bounds of its own magical world, I’m reminded of Melissa McCarthy’s Sean Spicer impression. “Your words, not mine.”

The plot holes are just one in a series of errors that constitute Moana, the second-worst flagship Disney film since the Little Mermaid renaissance (Pocahontas is the first; why can’t Disney figure out how to do a native people?). Its titular protagonist (Auli’i Cravalho, in her debut role) is plucky to the point of annoyance. Her companion, Maui, comes off largely as obnoxious and unpleasant until we finally realize his inevitable inner vulnerabilities (imagine Flynn Rider, but neither funny nor charming). Its art direction is at times breathtaking and at other times somewhat plastic-looking, like characters and settings were designed with future spinoff toys in mind. Its humor is awkward, full of painful puns that the actors’ deliveries only sometimes save (most of the laughs come from the peanut-brained chicken sidekick, whose stupidity leads to some pleasant slapstick).

But Moana’s biggest disappointment is in its overall narrative. Recent Disney films like Tangled and Frozen reveled in bending the princess-movie stereotypes that Disney has worked so long to establish. One can never forget the dream-struck rogues of Tangled or the true-love-between-sisters twist of Frozen. Moana, on the other hand, embraces these stereotypes full-on, checking off all the boxes on its generic characters. Moana, especially, feels like walking the well-trodden ground. She’s a princess, daughter of an overprotective father, she’s competent, she wants to see the world, and she knows that there-must-be-more-than-this-provincial-life. We’ve seen this character before, and we’ve seen her better (at least, during her strict adherence to a cut-and-paste Hero’s Journey, she never has time to fall in love). Her quest is entirely forgettable; she needs to get the Thing to the Place and can expect to encounter three Obstacles along the way. She’ll gain confidence and believe in herself and embrace her identity, and eventually defeat a giant monster in a wholly anticlimactic way.

Lin Manuel Miranda’s music serves as a frequent high-point, but while the catchy tunes are on-par with other Disney films, the lyrics are caught up in the undertow. Of the film’s already short soundtrack, two songs amount to little more than lists, one giving a general overview of Polynesian cultural practices (although where in Polynesia it’s impossible to tell; it seems to combine cultures of completely different islands) and the other recounting Maui’s adventures. It’s as if to shout “look at all the research we did!” to a predominantly white audience.

With a series of hits in Big Hero 6, Frozen, and Zootopia, Disney Animation Studios put serious wind in their sails. Too bad Moana does little else but capsize and sink. There’s almost too much of Scott Pilgrim vs. The World to handle. Perhaps it’s the inevitable result of compressing an entire graphic novel series into a single film. Perhaps it’s the unavoidable pitfall of choosing an aesthetic so overwhelming that advil might be an acceptable substitute for popcorn. But only one thing is for certain: Scott Pilgrim vs. The World does not know how to handle itself. It’s too ambitious, too creative, and too dedicated to its aesthetic to remember to follow basic rules of narrative and pacing. As a result, Scott Pilgrim is consistently ingenious and original only in terms of its moment-to-moment filmmaking craft. It’s a great series of clips, but it can’t tie itself down to become a great movie.

That’s not to say it isn’t worth watching; Scott Pilgrim is absolutely saturated with style, at times resembling a fighting game, an anime, and a martial-arts extravaganza all at once. Most every moment contains some sort of expressive vignette (ie, sounds often appear spelled out within the frame, 1960s-Batman style) or a bizarre (yet almost universally effective) editing trick that never would have been considered in film school. It shines with a neon sheen, and the crowded fast-paced effects-filled action is chaotic while still somehow remaining (unlike most American action scenes) easy to understand. Its dorky titular protagonist defies gravity as he flies across the screen like a superhero, encapsulating the fantasies that all nerds have of transforming their (or rather, our) average bodies into the champions of our media.

The sense of empowerment is thrilling, but all too often it ends up drowned out by confusion. Scott Pilgrim’s story is almost incomprehensible, despite its simplicity, and it alternately moves too slowly (almost nothing happens for the first half hour) and too quickly (the last 45 minutes are fight scene after fight scene, all of which are well put together, but none of which significantly stand out from the rest). Pilgrim is tasked with eliminating the seven evil exes (not necessarily ex-boyfriends, as he is often corrected) of his new girlfriend, an aloof girl with brightly colored hair named Ramona. Scott Pilgrim makes a joke out of the fact that it doesn’t actually explain this motivation until well after the movie is running full force, but the joke certainly isn’t funny. The first time an “ex” appears, and the movie leaps out of the relative normalcy of its first half into utterly surreal retro-game-style action, it feels like being thrown into the deep end of a pool without ever being taught how to swim. Scott Pilgrim is one of those films that you simply have to accept at face value because its internal logic is so nutty it becomes impossible to follow. That itself is fine, but it would have been better if the film actually signposted for us that this was how it was going to be, instead of expecting us to adjust for ourselves after a somewhat lackluster first act.

The film is lifted by its casting, which uses the typecast-reputations of big names to embody the cartoony, exaggerated roles of its comic-book world. We can tell that the Aubrey Plaza character is going to be dryly sarcastic, because that’s who Aubrey Plaza is. We can tell that the Chris Evans character will be a confident action-packed he-man, because that’s who Chris Evans is. Despite the fact that so many characters are packed into so short a film with such few introductions, this phenomenon demystifies each character and allows the audience a chance to orient themselves. Michael Cera in particular is an absolutely perfect Scott Pilgrim, bringing a shy sincerity and a reserved sense of humor to the character.

I have to confess to the nerd-crime of having never read the Scott Pilgrim comics, but given their relative obscurity outside of a certain fandom, that likely gives me the same perspective as most potential viewers of Scott Pilgrim vs The World. The people who’ve read the comics (excuse me, graphic novels) seem to think that the film is a loyal representation. But there may be something in saying that this was an adaptation that either shouldn’t have happened or should have happened over a series of films rather than a single one. Its originality makes it worth seeing, and its flashy action certainly keeps it enjoyable, but taken as a film rather than as a series of scenes it’s an overstuffed mess, dull near the beginning, preachy near the end, and relentless in the middle. Director Edgar Wright has never made a more creative film, but he’s certainly made better ones.